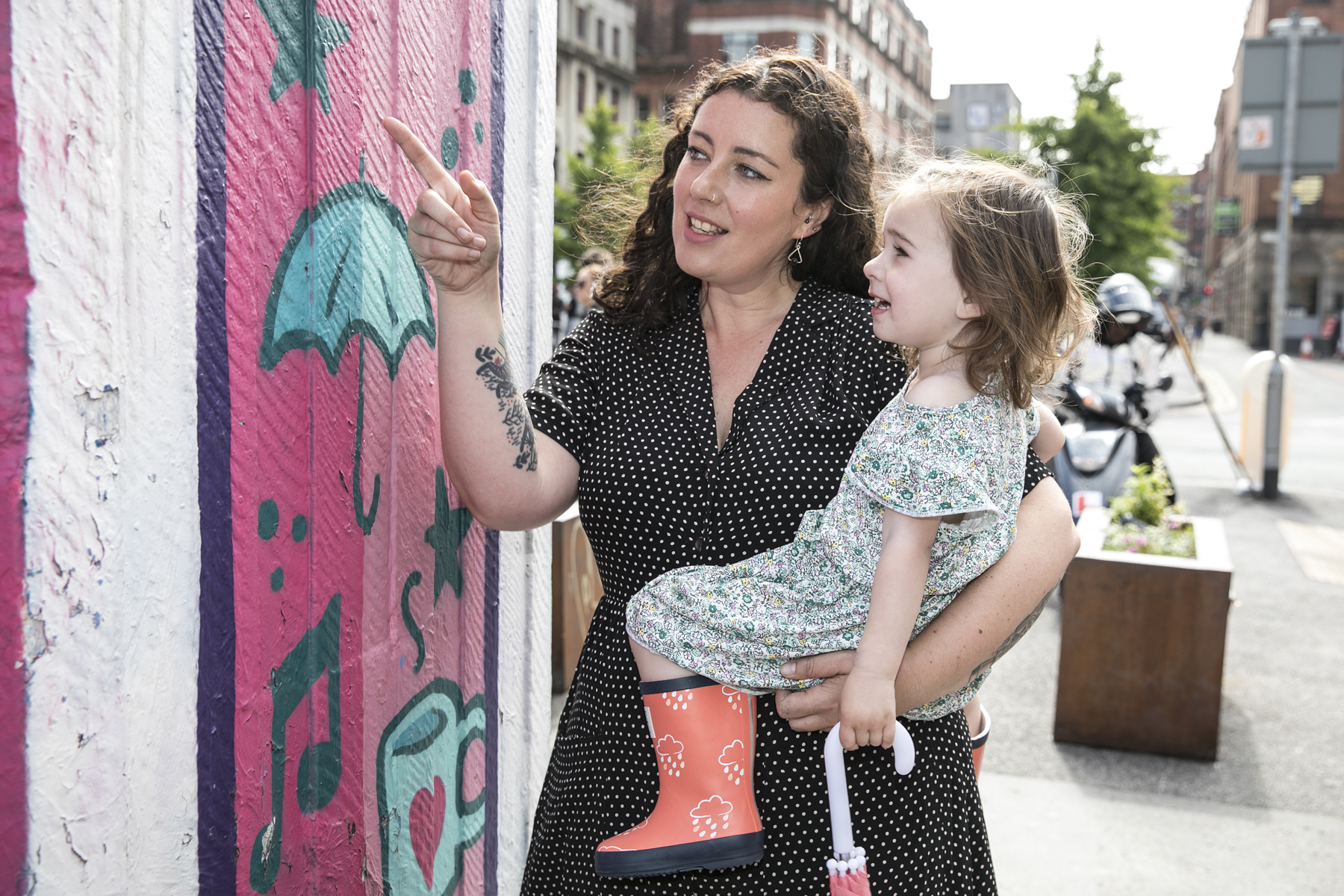 If you love a jazzy wall, you will love this blog post! Our next #wallstory is by an actual wall expert. Mum-of-1 Hayley (@skyliner) is an award-winning blogger and alternative tour guide operating in Manchester. We tasked her with curating a walk with a difference to seek out Manchester’s most Instagrammable walls and invited her adorable daughter Malin along to see how Grass&Air urban-inspired kit coped on the cool corners of Manchester’s hip Northen Quarter.

“I’ve been interested in all things Manchester as far back as I can remember. My interest became a passion and then, I suppose, an expertise. I was the UK’s first and only City Curator for the National Trust and since 2011 I’ve run my award-winning city blog Skyliner. In amongst that I’ve written for The Guardian and started the city’s only alternative walking tours. Looking for the city’s counter culture is what drives me.

Street art has seen a huge boom in recent years but the art around the Northern Quarter has a deepness and a history to it that isn’t as widely recognised. Since 1992 small changes in the area’s arts practice led to its transformation from an area of dereliction and decay to the city’s coolest neighbourhood, and its most community-minded one too. The origins of that arts trail is easy to spot as it’s largely ceramic – look for exotic birds perched on warehouses, a flock of doves lingering on a car park wall, and a giant pottery pineapple on a rooftop on Thomas Street. For decades art has driven the Northern Quarter forward and today, whilst most of the street art is autonomous and spontaneous, there’s a group of curators at work in the form of Outhouse. The Outhouse group are responsible for bringing together local artists to paint the abandoned underground toilets in Stevenson Square and an electricity substation on the corner of Tib and Thomas Street. 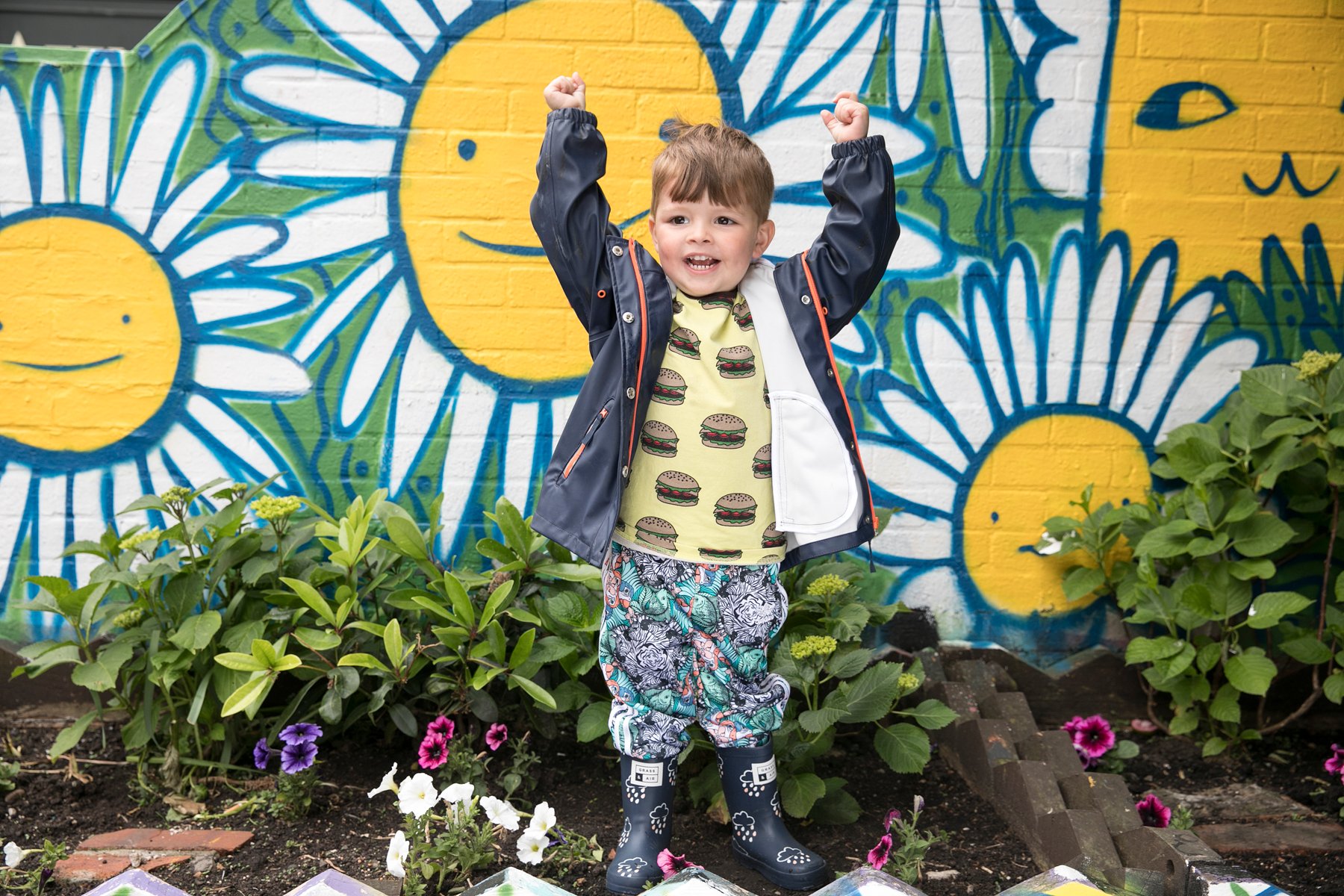 The daisies are by Tasha Whittle – one of the founding members of Outhouse. Tasha’s style always seems to brighten a place up and she is inspired by exploration and innocence. This piece can be found half way down Tib Street on an electricity substation that’s been used as an arts canvas for several years. If you’ve a keen eye you might also spot another piece through the painting – carved into the base of the substation wall, but painted over countless times, is a short poem about the River Tib: the underground river from which the street takes its name. 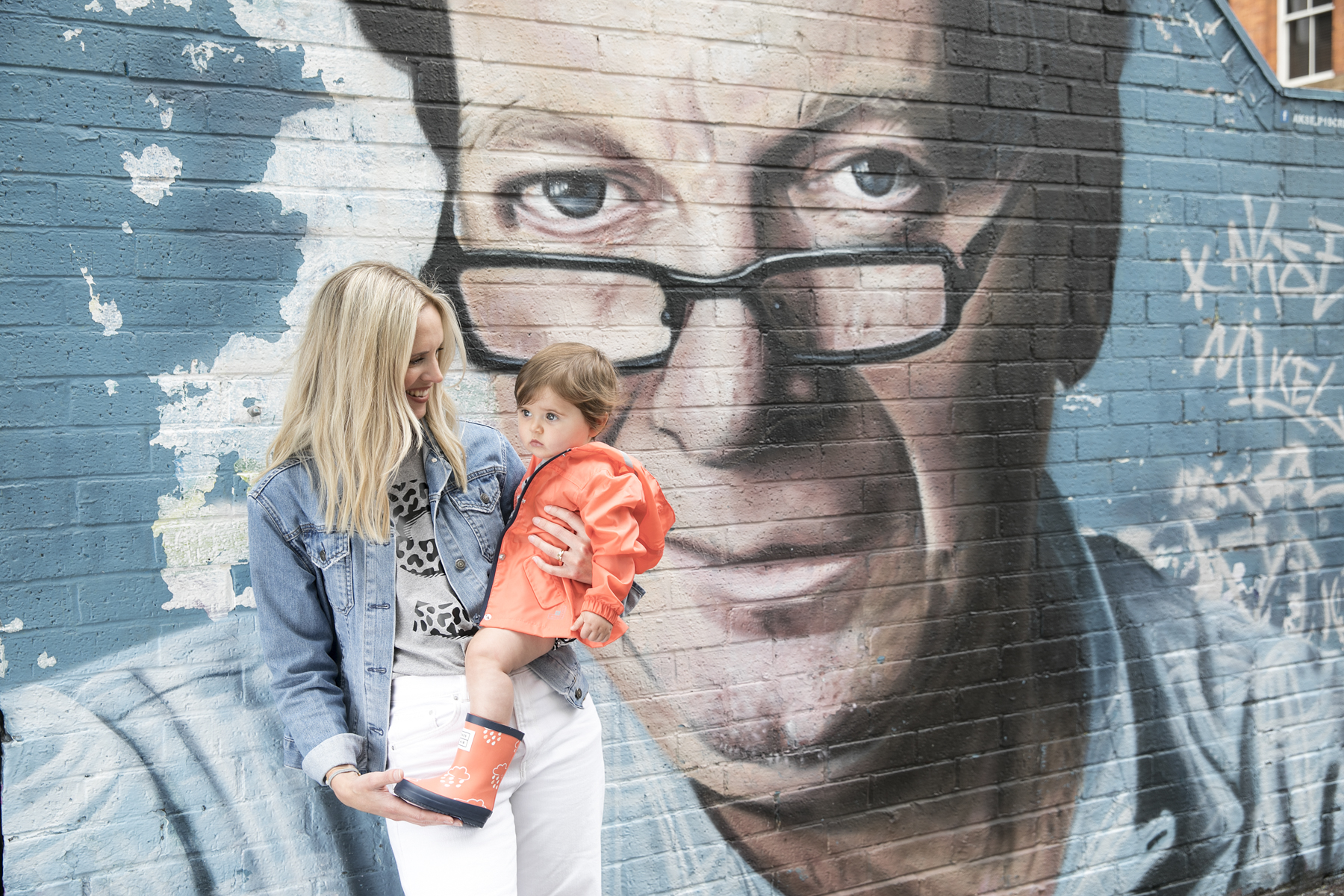 A Parisian artist who’s been based in the city since 1992, Akse’s style is photo-realistic and as well as portraying famous figures in pop culture he also likes to paint his son, with an aim of painting his portrait once a year in different cities of the world. This tribute to Tony Wilson (known to some as ‘Mr Manchester’) is signed not only by the artist but by his son who started scribbling his name on the work alongside his Dad’s. I really admire how quickly these artists work and to such level of detail. Akse lost half his allocated time to work on this as he spent a whole day stripping back the wall of posters and layer upon layer of peeling paint.  The portrait is based on a photography by Gaia Cambiaggi and the yellow and black stripes to the left of it are a nod to the Hacienda nightclub by artist Jay Sharples. 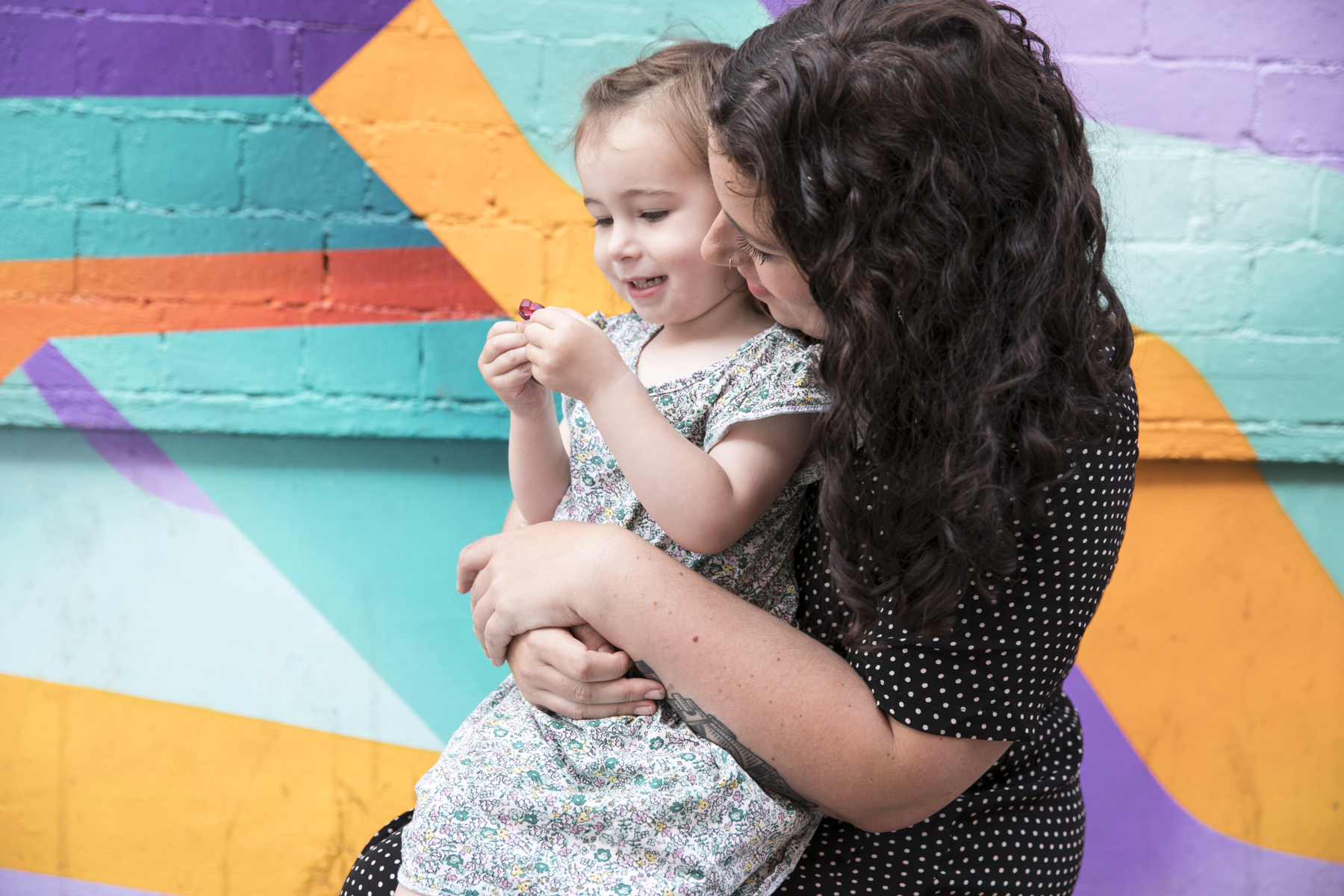 A mind bending optical illusion piece by Sheffield-based graphic artist Rob Lee. This colourful piece on Dale Street creates the illusion of three dimensions on a flat wall and this form of painting is known as trompe l’oeil. I love this piece for its vivid colours and how it transforms the street around it. The artist loves to play with perspective and is keenly interested in the effect of light and shade on colour (remember that gold/blue dress controversy? Well that’s his sort of specialism) If you hunt this one down try to get a look inside the club too as there’s a painting by Dale Grimshaw that’s well worth checking out.  Rob’s piece is painted on the wall of a 2022 – a “ping pong, music and arts space” – only in the Northern Quarter! 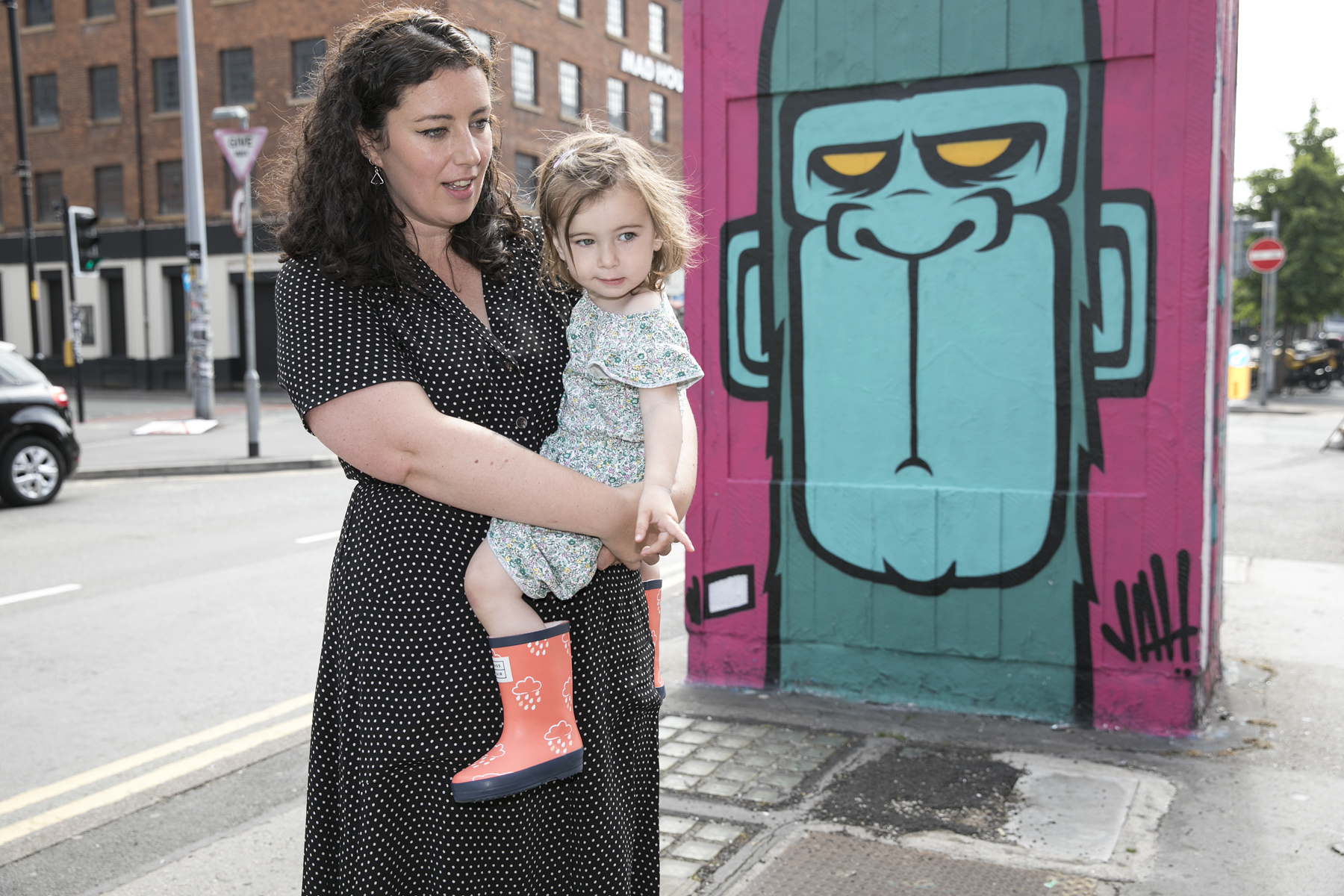 The external walls of this disused underground toilet, whilst small, are the centre of the street arts movement in the area. Changing around every three months under the curation of Outhouse the walls have become a real focal point for the Northern Quarter and attract photographers and street art enthusiasts. The art has helped to make the square a nicer, brighter place to be and since the start of the Outhouse project the area has transformed into a real vibrant heart of the Northern Quarter. Once a month a makers market sets up around these walls with DJs and food stalls really bringing the place to life. The art here is a reminder of the vibrancy of the streets and its people. The monkey is by Jay Sharples with other notable pieces by Hammo and Tank Petrol.

PreviousDay Trip Like No Other
NextDadventures: A Guest Post by A Day In The Life Dad’s Jamie Day